From Katrina... We have a beautiful natured male Staffy that is 2 years old - Tyson. He is wonderful... except that if we aren't home, he has to be in a pen (8 meters all the way around by 6ft high). So it's not exactly a tiny prison - due to his tendencies of exploring and chasing kangaroos.

We live on 5 acres so on weekends he is always off and running around with the family. We also walk him everyday and have play time every afternoon - I wouldn't have thought boredom would be the problem.

At the moment however we are at our wits end with him just deciding to disappear when something catches his eye and then not come back for up to 15 minutes at a time, which is a large problem with the surrounding farms (not that we have knowledge of him chasing/attacking any sheep etc).

The other problem we are having is with him managing to hurt himself without fail every month or so. And it's never just small grazes or nicks - he has had more stitches that any other dog I know!

The most recent incident was that he got stuck on a fence and tore skin which now requires 3 or 4 stitches.

Don't get me wrong - we don't just let him out to wander around alone. He is only out and about when we are home and can see him but he just manages to get away so quickly.

Any ideas would be greatly appreciated... to sum it all up, he has swallowed rat poison, been attacked by a kangaroo twice, gotten strung up on fences, sought out wire and cut himself... the list goes on.

Thanks for posting! Sounds like you have your hands full keeping this rascal out of trouble!

Dogs are very curious and inquisitive by nature, and as such, do tend to get themselves into trouble (some more than others).

They do not have the same ability as we do to assess a situation and come to the conclusion that something is not safe. Dogs live for the moment, so if in that moment chasing a kangaroo looks like fun, he's not going to stand there and think to himself - OK, this could potentially be dangerous!

Especially when it comes to prey-drive, some dogs seem to become oblivious to all else when they are in hunt mode. While this is deep instincts kicking in, it's best if we train our dogs that WE trump everything.

I bet you're thinking - yeah, sounds great... and how am I supposed to do that??? In a word, practice.

My mixed-breed, Justice, has hound in her, and as such, has the tendency to chase animals and follow her nose. However, we live in the city, so this is NOT safe!

We've trained her to have a very solid recall (come), so that in the case of her starting after a squirrel, I can call her back immediately.

The tools you need are: an electronic training collar (set to no warning sound before a correction) with a long range, a long line (around 50 feet), and a few tasty treats.

Before starting to work with an e-collar for this, be sure to spend several weeks teaching Tyson to come on a 6 foot leash. Never ask him to come if you are unable to follow through and make him listen (i.e. if he is off leash).

Why? Any time he gets away with not coming when called, or coming after you call him two or three times or more, he is being trained that he gets to decide if and when he'll come.

Be consistent with the word you choose to call him with, and only give the command once - you want to train him to come the first time you call him, every time.

I usually recommend making the dog sit in front of you when you call him to come (to be consistent), and stay there until you release him. Easiest way to make his recalls solid? Use this formula:

1) Practice calling him to come at least 12 times per day (at least!), and for the first week, give him a treat every single time for coming and sitting in front of you (you can tell him to sit once he comes).

2) Only call him when he is on a 4 to 6 foot leash for the first couple weeks, or until he is consistently coming right away when you call him.

From there, only call him when you have him on a short leash or a long line (of any length). Again, this reinforces the fact that he can't get away with not coming - just "reel" him in with the line if he doesn't want to come!

3) After the first week of giving a treat every single time he comes, switch to a ratio of 1 treat to every 3 recalls.

This is the ratio you will want to use from now on. In my training experience, I've found that if you make the ratio any higher, the dog's desire to come to you goes for a big dive. 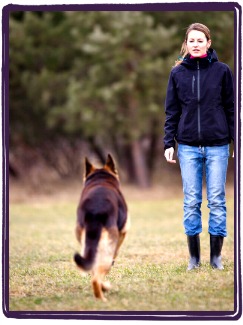 4) Once he is consistently coming when called while on a long line, start introducing the e-collar to him. You want him to associate it with positive things, so don't even turn it on for the first week of him wearing it.

Put the e-collar on him, and then give him a treat. Then take it off. Repeat it a few times. Put it on, and play ball with him! Feed him with it on, take him for a ride in the car with it on. Basically, make him think that this collar = fun stuff!

He can safely wear the collar whenever you are home (perhaps keep him close by on a long line so he will not get caught on a fence, etc.). Try to have him wear it as much as possible for a week or two without turning it on.

After this desensitization period with the e-collar, have him on your long line and put the charged collar (turned on) on him. Play with him for a few minutes to reinforce that the collar is good. Make sure you have a few treats in your pocket, too.

Hold onto the end of the long line, and let him sniff and roam around as far as the line will allow. Hold the long line and a treat in your left hand (straight at your side... we're not luring him to come), and the remote for the e-collar in your right hand.

Then call him to come like usual. Make him sit in front of you, and praise him. Keep that ratio of 1 treat to 3 recalls here.

Now, if he doesn't start coming towards you within 3 seconds, press the button on your remote (no longer than 2 seconds) to correct (I would start at the lowest level and work your way up until it is effective (you might see him twitch his ears, shake his head, etc.) - he should NOT be yelping.

Don't repeat the come command, but do repeat his name to remind him of what you want him to do. You can also give a gently tug on the line.

As soon as he starts coming towards you, verbally PRAISE! Again, make him sit in front.

Practice this daily! Once he is consistently coming to you on the long line with the e-collar on, you can start practicing without the line, and just the e-collar.

Remember - don't ever repeat the command (can repeat his name though)! Stick to the ratio of 1 treat to 3 recalls... believe me, it works - I've been there, done that, have an obedient dog to show for it!

As for the rat poison... well, it's best to keep these things out of reach, or limit his access to areas where it is. You can try doing some trouble-shooting with your e-collar:

Put a piece of rat poison (a large hunk that he cannot easily swallow) down on the ground, and have Tyson on a long line and e-collar. If/when he comes within a couple feet of the poison, press and hold your remote button for 2 seconds.

I would use a higher level correction that you have been for the recall - this is a life or death situation, and you want him to be wary of ever approaching this stuff!

I hope I've been helpful... sorry it has been so wordy, but I had a lot to say. Leave me a comment here to let me know how it goes! Oh, and I'd love to see a picture of Tyson, too.