Here you'll find tips on tracking dog training, and a quick history on human tracking and how bloodhound tracking was started.

Let's start with a little history... bloodhounds were the first man trackers, used not for sport (like today), but out of necessity to stop raiders from pillaging towns and villages in Europe.

Apparently, Henry VIII made use of Bloodhounds in the wars against the French, and Queen Elizabeth I used about 800 of these dogs during the Irish Rebellion. Later, Bloodhounds were kept on large estates to protect against livestock thieves and poachers. Run-away slaves in Jamaica and estates in America were tracked and hunted down by the Cuban Bloodhound.

Because of the use of this specific breed, the public began to think of them as ferocious and aggressive.  For quite a while, there was hardly any support for using these dogs in police work.

In truth, the dogs enjoyed following the scent and tracking, and were very rarely aggressive.  The breed is actually affectionate and very intelligent, but requires a firm handler in training.

Today, tracking dog training is done for sport as well as work.  According to Dogs in Canada, "hunting dogs track game by scent, search and rescue dogs track lost people, police dogs track bad guys, and some dogs just track toys for fun."  In competitions, tracking dogs are tested for willingness to work and their ability to follow a specific scent and locate or indicate articles.

Any breed can be used for tracking dog training, however, some are better at it than others as they were bred for that specific task.  For example: hounds, German Shepherds, Belgian Sheepdogs, and Labrador Retrievers.

Steps to Train Your Dog to Track 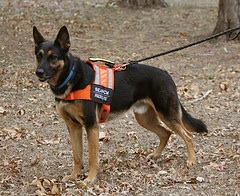 OK, enough history.  If you're reading this, you're probably interested in getting started with tracking.  While by no means exhaustive, this will give you an overview of tracking dog training.

First, of course, is your dog.  Before any training can begin, you need to know whether or not your dog has the proper drives for it - hunt drive, play drive and retrieving instincts.

Do a hunt drive test with him (with puppies, wait until they are eight weeks old):

The passing result will be for your dog to find his toy and/or bring it back to you.  If the dog gives up after a minute or two, is disinterested, lays down or just stands there waiting for your help - he doesn't have the required drive.  Another possibility for this response would be that the toy wasn't interesting enough to him.

In that case, try it with another toy before giving up hope :) Use a Kong, tennis ball, tug toy, squeak toy, water bottle, stick, or anything else that really excites him.

Why is this test important?  It tells you if your dog has the necessary mental concentration needed for human tracking.  Also, this toy becomes the reward for your dog for finding the article or person (not food).

If your dog passes the above test, the toy that is going to be used should be put away except for training.  This keeps it a novelty, and not just a regular chew toy that he always has access to.  Believe it or not, a tracking dog is really looking for "his toy" on a search, not necessarily a person!

Next, you want to focus on socialization, obedience training and building drive, especially in a puppy or younger dog. The more your puppy experiences positively, the able to concentrate and balanced he will be as an adult.

The dog's temperament needs to be stable, so get him used to new people, unusual terrain or flooring, smells, darkness, shadows and weather.

The tools that you'll need for tracking dog training are:

A harness usually works better than a collar for tracking, as it doesn't constrict the dogs throat at all when he is pulling.

Make sure that your leash is strong - leather or biothane is the best - as your dog will be doing a lot of pulling.  Obviously, this is not the time to be correcting your dog for pulling on the leash!

Training a dog to track.

The handler gives a command ("Milo, search!", or your choice of word) and encourage the dog to follow the helper.  Do not lead the dog; let him pull you.  As soon as the dog finds the helper, give him the toy and let him carry it around (don't let him chew it up, though). After a minute, take the toy away again.

Slowly, you should make the searches longer and more difficult.  Remember to always load the dog up before searches.  Eventually, the handler will hang onto the toy during a search, with it hidden in a back pocket.  He will then toss the toy from behind in front of the dog for it to "magically appear" when the dog finds the helper.

Don't try open searches until your dog is completely reliable off leash.  And remember, this is just an overview - for complete tracking dog training, talk to a dog trainer in your area, or check to see if there is a tracking club nearby.