How to Stop Dog Chewing NOW

Are you desperate to know how to stop dog chewing? Maybe you dread what sort of disaster awaits you when you return home from work.

Dog chewing is a problem that often shows up shortly after bringing home a new puppy (or even sometimes an adult dog), and trying to stop it can feel impossible! At the beginning, puppies start chewing to relieve their teething.

Unfortunately, this often turns into a habit, and when left uncorrected can turn into quite a problem. I have seen dogs chew shoes, socks, underwear, leather purses, TV remotes, telephones, chair legs, pillows, couches, and even drywall and doors! 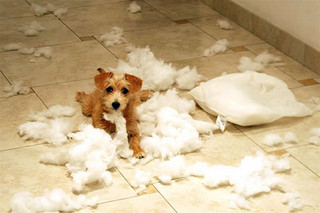 Stop dog chewing before it gets out of control.
Flickr | deb@deb-gray.com Gray

If you have a new puppy, there are things you can do to prevent his teething from turning into a huge problem.  However, the key to stop dog chewing is PREVENTION!

You're likely wondering how in the world you can prevent the crazy dog from putting everything and anything into his mouth.  Two words for you... crate train.

I know, I know - many of you are horrified at the thought.  Please try to stick with me here for a minute while I explain myself.

Crate Training is the Best Prevention!

Used properly, a crate is a safe place that your dog will enjoy spending time in.  It should never be used as a way to discipline a dog.  Why?  Dogs don't understand time-out; correction needs to be in the moment, no less than 1.5 seconds after the bad behavior occurs.

Let's say you find your puppy chewing something he shouldn't be.  By the time you drag him over to the crate and get him in there for his "time-out", he has no idea what it's all about.

Yes, your dog knows you're angry.  But he will not put that together with whatever he did wrong before you forced him in the crate.  He will simply associate going in the crate with you being angry - and therefore will begin to hate his crate.  See how that's a problem?

Take at least a week to slowly and properly crate train your dog or puppy.  Always make it enjoyable for the dog - give him a treat for going in, leave favorite toys with him in the crate, and put a comfy bed or blanket inside.  Especially with a puppy, be sure to walk him and let him pee or poop before crating.

So now whenever you aren't able to keep both eyes on your dog, or you have to leave the house, crate him.  If you can't watch the dog while you're cooking dinner, you should crate him for that time.  Throw in a chew toy and put your dog in his "play pen" where he'll be safe and away from any tempting shoes.

I recommend buying a sturdy plastic Vari-kennel over a wire crate.  Dogs seem to like these kennels better, as it is more of a "den".  If you do have a wire crate already though, you can cover the crate with a blanket to make it cozier for your dog.

Remember to get the proper size, too - your dog should have room to stand up, turn around, and lie down.  That's it.  Any more room, and he will pee or poop in one corner and sleep in the other.  Dogs don't like to lay in their feces or urine, so having a fitted crate will prevent this.

Another fantastic way to prevent unwanted chewing is with a bitter apple spray. It tastes awful, even to dogs, and is often used by vets to prevent chewing on sutures after surgery.

Lucky for you, it works just as great around the house! I've never noticed anything, but if you're worried about staining, test it first in an inconspicuous area.

I've used it with great success on rugs, throw pillows, shoes,the laundry basket full of dirty clothes... you name it.

But be careful of inhaling when you spray it, though! 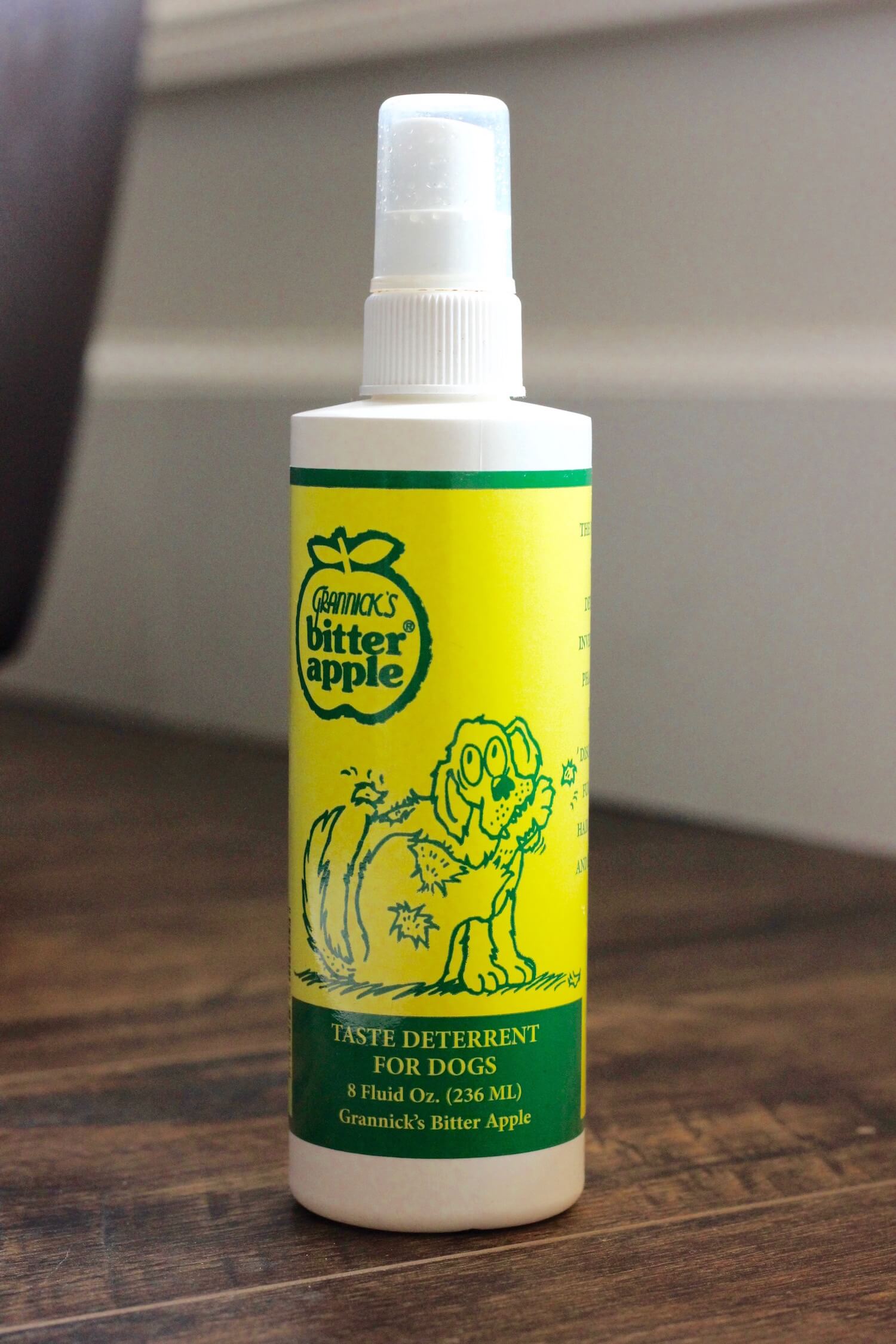 You may experience gagging, coughing and dry heaving... don't ask me how I know :) At least you could say that you tested it on yourself before using it on the dog!

A Bored Dog is a Chewing Dog...

Dogs have a natural instinct to be active. To move. To work. Some breeds tend to be higher energy than other breeds, and even within a breed there is a spectrum of individual energy levels. That energy needs an outlet.

Boredom and insufficient exercise will turn even the best pup into a brat, through no fault of their own! Trust me, your dog will burn that energy in their own way if you can't be bothered to walk and train him yourself.

Stuck in the house? He'll find things to chew, bark at everyone who walks by, and make a general nuisance of himself. Alone in the yard? Again, chewing everything, barking, and digging will occupy and entertain him!

If destructive chewing is plaguing your home, try increasing the number (or length) of walks each day. Add in a game of fetch. Do some obedience training to exercise your pup's mind as well as his body.

What About Chew Toys?

Let's take a look in your dog's toy box.  If you have a chewing problem, it's often safe to say that you're giving him toys that aren't the best choice!  A puppy is much like a baby in that they put everything in their mouth.  It's a way for them to experience new things.

When your puppy is allowed to chew a stuffed fabric toy, he will think that anything that feels the same way in his mouth is fair game.  What feels like a fabric chew toy?  Socks, running shoes, underwear... you get the idea.

The same goes for pig ears - in a dog's mouth, they have a leathery feel to them.  That's right, it feels the same as your leather purse, shoes, and couch!  So what are the best dog chew toys?

A general rule of thumb is to stick with rubber-like toys or bones.  My pup, Milo, has a Kong, a couple of Nylabones, a few balls (not tennis balls!), and a small antler.  Kongs are great as you can put a treat or a bit of peanut butter inside, and because of its shape, it has a fun bounce to it that dogs love. 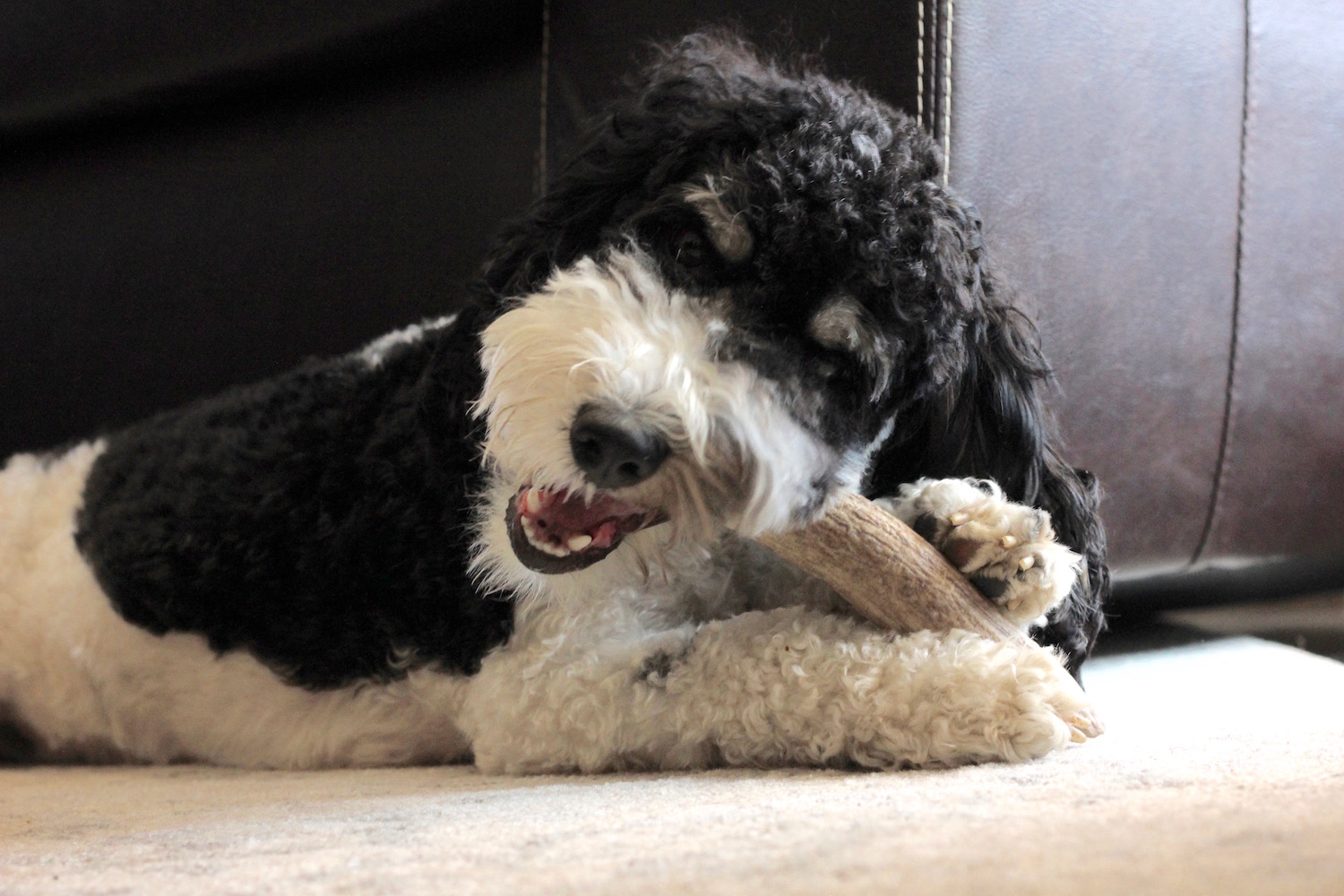 Milo getting in a good chew on his favorite antler.

Stop Dog Chewing in the Act

While prevention will go a long way to helping with inappropriate chewing, you need to also be catching your dog in the act with a correction while they're chewing in order to solve this dog behavior problem.

So what is the best way to do this?  Keep your eyes peeled.  When you notice your puppy or older dog chewing something he shouldn't be, give a loud, sharp, "Eh!" sound to startle him.  Don't say "no" - this means nothing to a dog.

You can also try using a training shaker.  Keep an empty pop can with a few pennies in it, and put some tape over the opening.  Hold it behind your back and shake it when you catch the dog chewing.  Don't let him see the shaker otherwise he'll only avoid chewing when he sees that shaker around!

If neither of these are very effective, another good tool to use is a small boat air horn.  Be fore-warned - this will be an extremely loud sound! You can buy one at Walmart, and it should be small enough to fit in your palm.  Again, hold it behind your back, and when you catch your dog chewing something he shouldn't be, press and hold the button for 2 seconds.  Remember, you need to correct no later than 1.5 seconds after the behavior for it to be effective!

Teaching an "Out" Command

Another solution to stop dog chewing is to teach your dog a command for him to drop whatever is in his mouth.  This is especially helpful if chewing isn't necessarily the problem, but he just seems to enjoy stealing objects for the joy of having you chase him!

Keep a dog training collar on Rover in the house whenever you are home to supervise.  Attach a leash or light rope to the collar, and keep it on at all times during the training period.  This can be for one week, or for a month, depending on how long it takes.

Choose a command that is short - preferably one word.  I use the command "Out", but you can use any word you like, such as "Drop" or "Give".  Just be consistent and have the whole family always use the same word so that you don't confuse your dog.

As dogs like to pick things up and then run with them (especially my Cockapoo, it seems!), it's easiest to set up scenarios to train this command rather than chasing him around when it happens.

First get your dog interested in a toy, and let him pick it up.  You should have a leash and collar on him at this point.

Next, give the command to drop the object - "Out" - in a firm but even tone of voice (don't shout).  Wait 3 seconds; you want to give your dog the chance to follow through before you correct him. 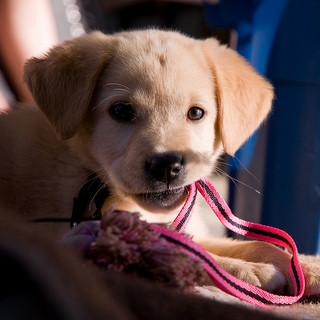 Teaching an "out" command is one step to stop dog chewing. Jonathan Kriz | Flickr

If the dog continues to hang onto the toy, repeat the correction by popping up vertically again fast and a bit firmer.

But please, don't repeat the command!  You want him to listen to you the first time you give a command, not the second or third time (which is what will happen if you start repeating commands for him).

As soon as your dog drops the toy, praise him verbally and physically, but don't let him grab the toy again. If he tries to pick up the toy after your praise, repeat the same correction without repeating the command.

He needs to learn that once you tell him to drop something, he can't pick it up again until you say so!  Wait at least 10 seconds, and then you can give him a release command ("OK") and encourage him to pick up the toy again.

Remember, always give 3 seconds for your dog to follow
through before giving a correction - you still need to be fair!

Practice this a few times a day - your goal is for the dog to spit out whatever is in his mouth immediately, the first time you tell him to.

And keep a collar and leash on in the house for a few weeks!  That way, when your rambunctious pup tries to take off with your shoe, you can grab the leash that is trailing on the ground and tell him to "Out".

Many trainers will tell you to trade your dog for the toy by giving him a treat. This is NOT obedience, this is a bribe! And what are you going to do if you don't have a treat on hand? And what if whatever is in your dog's mouth is tastier than your treat?

Also, don't try grabbing it out of your dog's mouth - it will just turn into a power struggle.

If you implement all of these solutions, you'll be well on your way to getting your pup's crazy chewing under control. Chewing in and of itself is a natural behavior for dogs, even necessary. So expecting your puppy to never chew anything again for the rest of his life would be unrealistic.

But instead of leaving him up to his own devices, set him up for success. Give sufficient exercise, crate train, and make sure your pup has some good options for appropriate chewing. You got this!

Grab a copy of my House Training e-book here!