As a kid, I remember watching the sled dogs in the Walt Disney movie Iron Will over and over again, which followed Will’s run of the dog-sled race from Winnipeg in Canada Canada to Saint Paul, USA.

Then came the movie Balto.  Based on the true story, Balto was the lead dog of the sled team who brought the diphtheria serum over the last leg of the relay to Nome in 1925 during the diphtheria epidemic.

Again, I was enthralled.  Really, any movie that had a dog starring in it rated high with me!  But movies are one thing, and real life is another...

A Little Bit of History

Sled dogs are said to be first traced back to Mongolia, and from there to the Arctic Circle.  It appears that they were used in Siberia, Canada, Lapland, Greenland, Chukotka, Norway, Finland, and Alaska (USA).

Dogs were used in both Arctic and Antarctic expeditions, up until 1992 when they were banned from the Antarctic due to environmental protection.

During the Alaskan (or Klondike) Gold Rush of 1896 - 1899, dog sleds really took the center stage as they were essential to transportation in the winter weather.  Everything and everyone traveled via dog sled during the frozen seasons.

At this time, they also started delivering the mail to Alaska by dog sled, and continued to do so throughout the early 1900's.  A team of eight to ten dogs could haul 700 pounds of mail!  In 1963, the last dog sled mail delivery team retired, making way for airmail.  Since then, dog sledding has become more of a recreational sport to keep up the tradition of mushing.

While many breeds can be sled dogs, the most common ones you’ll see are: 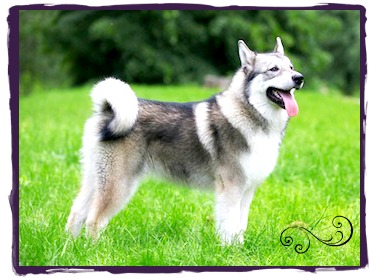 The Alaskan Malamute is a very common dog sled breed. 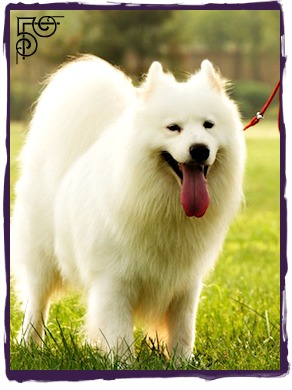 The Samoyed has a beautiful white, fluffy coat. 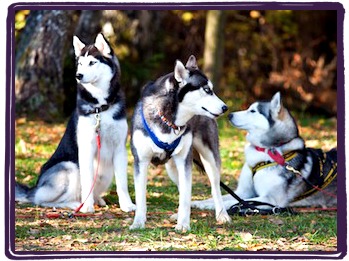 Huskies are another common breed used for sledding.

Again, these are just the most common breeds used for dog sledding.  That's not to say that your dog can't join in the fun...

As long as your dog is over 40 pounds, is in good general health, and has no bone or joint conditions, there's no reason you can't give this dog sport a whirl!

The most famous race is the Iditarod Trail Sled Dog Race in Alaska, which commemorates the relay to Nome in 1925 with serum for the diphtheria epidemic (remember Balto?).  Since the start of this race in 1973, mushing gained popularity and there are now many races worldwide.

The Iditarod is a staggering 1,800 kilometer long endurance race that takes the teams an average of ten to eleven days.  I can NOT imagine being out in the cold for that long!  Although with the grand prize of $50,000...

Sled dog races vary from shorter sprints to long distance runs and multiple day events like the Iditarod.  Depending on which type of race it its, dog team sizes range from two to sixteen, and even unlimited number dog teams.

Training for competition typically begins when a pup is still young.  Initially, it will consist of socializing a puppy to being handled by humans, and to new sights and sounds.

A harness is introduced, and then the pup is familiarized with feeling a bit of weight or drag behind them - often just a simple line with a stick dragging behind him.

It's really important that all training is positive, and your puppy is never corrected for pulling.  In this way, it's difficult to combine certain obedience training like heeling with dog sled training.  It's too confusing for a dog!  Most competitive mushers raise and train their dogs from puppies for racing, so this attribute is already bred into them.

Thanks to JKBrooks85 of Wikipedia for this great graphic of dog sledding team features.

Full out training doesn't begin until after a dog is a year old usually.  Keep in mind that your dog isn't mature until around two years old, so this is when training and racing really starts.

Sprinting dogs retire sooner than long distance dogs, with the average age of retirement being 8 to 10 years old for distance dogs.

Maybe your dog is a typical sled dog breed.  Even if you don’t live in a part of the world where mushing is common, or don’t have the desire or ability to start dog sledding.  That’s OK!

What’s good to keep in mind, though, is that these breeds are working dogs.  This is ingrained in their breed, and as such, have high energy levels.  What does this mean for you as owner?

Well, for starters, I can’t stress how important it is that your dog get the right amount of physical and mental exercise!  Under-exercised sled dog breeds have been known to become destructive in the house, easily ruining furniture, drywall, doors, and shoes.

Crate training your dog can go a long way to preventing this from happening, but it's even more vital that you take the time to exercise your dog.

I always say that a tired dog is a happy, well-behaved dog.  A couple short walks each day won't be enough for your working breed.  A dog treadmill is the perfect supplement to daily walks, and almost all dogs can be trained to use one.  Or why not try a sport that your dog will love - if not sledding, you can try bikejoring, skijoring, or canicross!

Whether you're interested in mushing competitively with your dogs, or simply want to understand how best to keep your dog happy as a family pet, dog sledding has a great history and teaches us a lot about the sled dog breeds.

Have you and your dog(s) tried mushing?